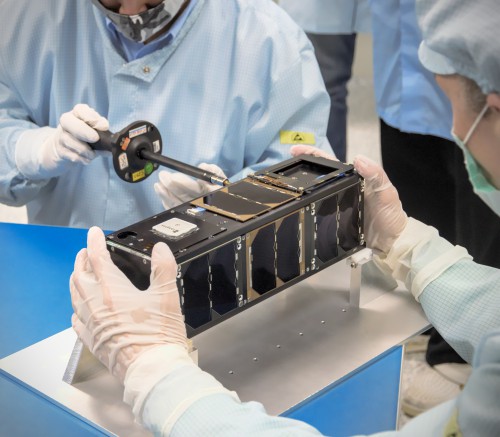 VZLU
Czech Aerospace Research Centre is a national centre for aerospace research, development, and testing. Its mission is to provide scientific support and bring innovative solutions for the industry. The main focus of VZLU's activities lies in areas with high added value, such as projects for New Space and Urban Air Mobility.
New Space
VZLU has been involved in space projects since 2005, when it was selected by the European Space Agency (ESA) to develop and construct three accelerometers for the Swarm mission. Since 2017, the first Czech nanosatellite VZLUSAT-1, developed by VZLU, has been orbiting the Earth, being now the longest operating Czech satellite, as well as one of the longest-operating CubeSats in its category. The second VZLU nanosatellite - VZLUSAT-2 - is prepared for launch on SpaceX Falcon-9 rocket, scheduled for launch in Q1 2022. Among the VZLUSAT-2 payloads are optical systems for detailed Earth observation and the device for attitude control. The VZLUSAT nanosatellite family follows the New Space philosophy, which helps to decrease the cost of space components using commercially available parts and processes.
However, VZLU space plans are not limited to CubeSats, as those are only intended to verify technologies for a planned constellation of small satellites. The Hyperion Constellation, whose first satellite will be launched in 2024, will be used primarily for fast communication and Earth observation in various modes. However, over time, the satellites will also focus on other tasks necessary for Smart City development. The satellites take advantage of a scalable and modular construction that allows different payloads to be installed in the same satellite bus, according to the customer's needs. The weight of the small satellites will range from 30 to 200 kg.
Urban Air Mobility
Although the core of VZLU's activities lies in the development, testing and certification of classic aircraft, VZLU experts are also taking part in ongoing trend concerning alternative propulsion, unmanned aerial vehicles and new philosophy of urban and suburban air mobility.
Within VZLU, department of unmanned systems has been established with the goal to develop a new concept of unmanned aerial cargo vehicle fully VTOL capable (eVTOL) with a projected payload 400 kg. The same modular concept will then be used to develop autonomous vehicle for transporting passengers within the city and suburban agglomerations.
VZLU operates a unique research, development and testing infrastructure, which includes high- velocity and low- velocity wind tunnels, flexible solutions for full scale strength and fatigue tests, material laboratories, engine laboratories, clean rooms for space research and testing or thermal vacuum chambers.
VZLU was established in 1922, Prague, and since then more than 150 aircraft have passed through it facilities. The research centre participated in the development of all major types of Czech and Czechoslovak aircraft such as the L 410 and L-29 Delfin and L-39 Albatros.
Social media
TWT: https://twitter.com/VZLUcz
LI: https://www.linkedin.com/company/952377
Contact
www.vzlu.cz
info@vzlu.cz
+420 225 115 222